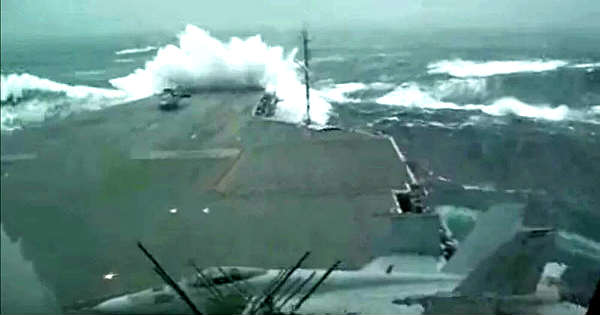 Whenever we encounter a video in which there is an exciting thing that is going on, we would all like to see every last second of it. There is a category of videos that wake up our inner feeling of thrill and excitement, even though we do not actually do anything, rather than watch. Hereby, it is time to take a look at exactly that, a video that shows just how glorious this big aircraft carrier tackles and breaks through those huge waves in the middle of the ocean. It looks cool and terrifying at the same time. One of the crew members who were inside the ship decided that it was the perfect time to take his phone out and to film something awesome that he knew that it was about to happen. There was a horrible storm, followed by rain and wind.

The ocean got extremely dangerous place to be but the aircraft carrier did not any choice. It just simply had to go through the waves and to try to get out from it as fast as possible.

The direction that they were heading was the opposite from the direction of the waves hence they knew that this was the only possible way to avoid getting flipped over.

There 50 seconds of pure excitement and thrill are the perfect ways to start your day with a style. Soon after the video ends and we do not know whether the ship managed to get away safely from that situation!