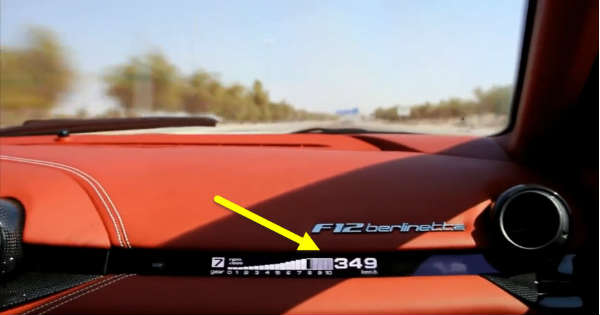 Certain cars are made purely just for speed and power, and this has been true ever since the car industry began to rise. Many amazing models have been created and each year some of the world’s leading car producers are looking for better ways to make their cars even better. Hereby, we take a look at what this Ferrari F-12 Berlinetta is really capable of. Namely, the driver decided to push this monster to the upmost limit and see what its top speed could be on this Abu Dhabi Highway! Yes, this guy decided to push his car to the limit on a PUBLIC road, which according to many is not the best idea to do it. Nonetheless, once the Ferrari F-12 Berlinetta was up and going, it seemed like nothing could stop it. It took just couple of seconds or so until the car was going at a speed of over 200km/h, but then the best part came.

The driver was not hesitating at any moment and soon after he managed to go at speed of 300km/h. If that was not enough, he managed to reach a massive speed of exactly 349km/h.

Yes, you heard it right. This PP-Performance Ferrari drove that fast on a public road in Abu Dhabi. The speed could have been exactly seen at the passenger’s side hence there was a panel in the dash board which showed exactly how fast the car was going.

What an amazing car this is!